Many know Seattle as a rainy, yet bustling city, that is home to tech giants, like Microsoft and Amazon.  While these things are quite true, Seattle has much more to offer than rain and tech billionaires!  This city is brimming with rich culture and history.  For those curious about what else Seattle has to offer, we’ve prepared a list of some of fan favorite spots!

Everyone knows the Space Needle!  This futuristic looking structure is probably the most iconic landmark in Seattle, possibly even in the state of Washington!  The Space Needle is an observation tower that was built back in 1962, as an attraction for the World’s Fair.  Back then, when it was unveiled, over 2 million people visited it.  It remains incredibly popular to this day, as it receives roughly 20,000 visitors each and every day.

A little less known, but still quite popular is Pike Place Market.  This humble farmers’ market draws in about 10 million visitors each and every year!  It’s been around for over 100 years, so they must be doing something right, with all the fishmongers, food shops, and craft centers.

An interesting hidden alley right by the Pike Place Market is a hidden work of art, the Gum Wall. The unexpected and colorful display truly depicts Seattle’s unique charm and character. 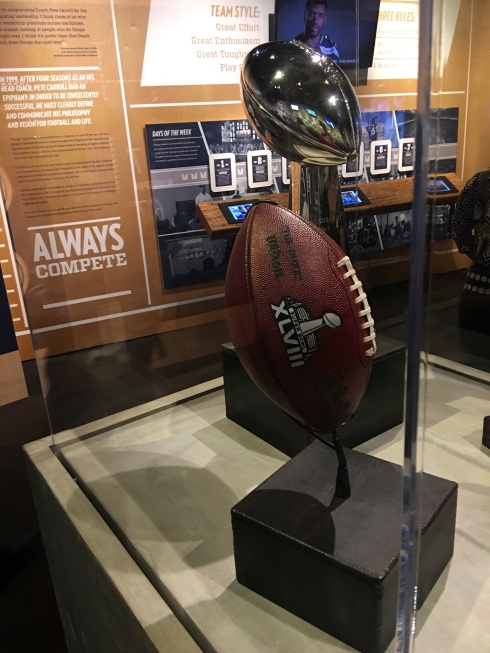 If you’re a fan of sports, you may have heard of the 2014 Super Bowl Champions, the Seattle Seahawks.  This great team calls CenturyLink Stadium their home!  This magnificent stadium was opened in 2002, and cost nearly a half a billion dollars to build at the time!  With a maximum occupancy of 72,000 people, you and all of your friends can find some space to see a game.

Although, there are tons of things in Seattle outside of the tech sector, any article about the city would be incomplete without mentioning the giants that inhabit it.  Amazon, Microsoft, and Boeing, all have their flagship headquarters in Seattle.  These business titans have shaped both the city, and the entire world, and will continue to do so for a very long time!

Remember how we were just talking about Pike Place Market?  Well, that just so happens to be where the very first Starbucks is located!  Established in 1971, this little coffee shop was the one that started it all.  Ever since then, the rest is history.  If you ever want to see how one of the world’s greatest coffee chains was created, stop by and get yourself a cup of coffee from the original!